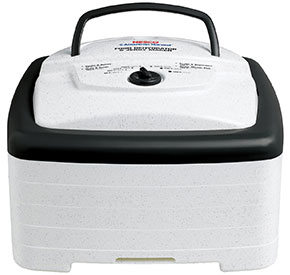 OUR RATING
Check on Amazon

If you’ve been accumulating extra fresh fruits and vegetables don’t just throw them away. Instead, dry them and use them later as a snack or as an ingredient in variety of meals.

Our suggestions is to try this budget-friendly dehydrator to help you out, Nesco FD-80A. There is a reason why people love and prefer this brand amongst many others.

So we decided to write a full review and help you decide if this is the one you want to buy and have in your kitchen.

Drying Food and Why It’s Good

When it comes to drying, you would think that using a dehydrator is the same as using an oven. An oven is great for baking and cooking but when it comes to dehydrating the results are not as admirable. Its because an oven uses to much heat and therefore destroys all the proteins and enzymes in the process. It may taste good, but the food don’t come out as healthy as in the process of dehydration.

With a dehydrator you can set a precise temperature range specially designed and predetermined for your needs. Dehydration is a way of removing moisture and water from a product. It is designed in such a way so that there is no so-called case hardening. When an item is heated fast, it catches a hard crisp on its surface while the insides of the food stays moist.

Dried food can last longer, take up less space, and it is not that easy to spoil like fresh one. One of the best products that will help you get started comes from Nesco, the Nesco FD-80A.

The FD-80a on the first glance resembles a fruit or picnic basket. It’s a cubically shaped dehydrator and therefore utilizes 40% more space then the round made models. Its produced in white color from solid BPA plastic that can block any harmful light and thus protect the food and its nutrients during the process of dehydrating. It consists of four stackable trays with the ability for stacking more, if you seek a larger surface for drying.

It has an adjustable thermostat with no power button, and it only consists of a power cord for power management. The motor and the fan are located at the top part that serves as a cover. The top has a nice and convenient handle for easy removal. The trays are made from durable plastic and have an opening in the middle for patented converge airflow.

The Nesco FD- 80A has four stackable trays which are designed in such a way that the hot air can be evenly distributed across all plates. Its motor and the fan are placed at the top and once powered the fan starts pushing the heated air downwards pass the outer pressurized chamber, which prevents the air to go directly through the trays.

If the heated air were to go directly through the trays, the first dish that’s at the top would heat up faster, and by the time it reaches the bottom plate, the air would get colder.

Therefore the air moves in the inside, down pass the walls into the center of the plates, into the core of the plates resulting in all the trays drying evenly and preventing the need to rotate the plates. This is also useful solution since it speeds the drying process by a significant margin.

This unit has an adjustable thermostat ranging from 95 to 160 Fahrenheit which falls in entirely in the scale needed to dry any foods as most of them require and are recommended to be dried at around 110 F range.

Whether you like to dry delicate foods, like herbs, or you are a fan of beef jerky this unit with its 700 watts of power will satisfy your need entirely. While the thermostat itself doesn’t have a power button once the device is plugged in you just set the slider to the desired temperature and you are good to go.

The foods and temperature range for specific foods are conveniently printed on the top cover for easy manipulation and serves as a reminder or as presets for your favorite snacks.

The Nesco FD-80A is perfect for small families. Each shelf is a little over 14 inches and can perfectly accommodate a pound per plate. For those who think that’s small for them, this unit is also expandable to a maximum of 8 trays.

Each tray is made of a dense plastic called BPA free plastic and it’s unique because it blocks the harmful light entering the produce during the dehydration procedure. This works both ways so the hot air will not escape the device or the trays will not get heated. It means that you shouldn’t be afraid of getting any burns while manipulating with the said plates.

With the unit, you get the four stackable trays, but on top of those, you could use mesh sheets for smaller foods, such as vegetable or fruit seeds for spices, or some more liquidly items like tomatoes (one of this is included in the package). You could also purchase Teflon covers for drying foods like fruit leathers. While you have to buy Teflon sheets separately, you could also use the round ones since they fit this unit perfectly or use some of your old ones if you have them.

Clean and Easy to Maintain

With its motor and fan placed at the top is an upgrade compared to those dehydrators you can find selling at the compartment store since it prevents the exes moist and water dripping on the motor. On the bottom of the tray, you have a platter made of plastic that collects any drips that may occur during the process of dehydration.

This provides fast and easy manipulation of any trash residue fallen. The trays and the bottom platter are easy to clean and are dishwasher safe.

If you want to start dehydrating and therefore eating healthy food without any harmful preservatives, the Nesco FD-80A is a great start. Its affordable price makes it an excellent product. Although it doesn’t have some fancy features like the digital timer or see-through door it has what any dehydrator needs. That’s all you need, a powerful motor capable of dehydrating.

Despite its setbacks for features if you value health over premium and expensive design this is a device for you. Its recommended across all popular online forums and websites, so you have nothing to lose if you choose to get it and be sure you won’t regret it.